All Cycling UK members welcome though only full members are able to vote or hold committee positions.

We welcome your support. Please email ctccornwallsecretary@gmail.com  to obtain the meeting access code, which will be sent to you in the week before the event.

A good turn out witnessed an inspirational talk from Graham Brodie on his Audax adventures over the past 30 years and, in particular, his attempts to conquer the Paris Brest Paris ride – where thousands of riders do what they can to complete the 750 miles within 90 hours. We heard of a rider who managed the feat within 89 hours 59 mins and 59 seconds; of many riders who didn’t make it through heat stroke, mechanicals and sleep deprivation; and we heard from Graham how he learned from his own experiences of wasting too much time with other cyclists, and his overheating feet, so that this year he managed the task with three hours to spare.

In his annual report, David Byfield noted that it had been another busy year for CTC Cornwall with many rides and events organised. He announced that, following extensive consultation with local riders, it had been decided that the Liskeard cycle groups would, from 1st November 2019, form a new cycle club affiliated to Cycle UK, called Liskeard Velo. This would not affect the ongoing existence of CTC Cornwall, which would continue to support cyclists throughout the county and the Penzance Cycle Group. It would also be CTC Cornwall which would continue to organise and fund public cycle events, such as the Christmas family ride; family BBQs; and the Women’s Festival of Cycling.

The new Liskeard Velo club, which would now include the former groups Liskeard Velo, Liskeard Ladies, Liskeard Easy Riders and the two Wednesday social ride groups, would mean cheaper membership for people in work and part time work. From 1st November, it would be a requirement that riders should have Liskeard Velo membership (£5 per annum) plus third party liability insurance. Members could choose where they purchased their third party insurance. Some might want to continue to have this through full Cycle UK membership; but it would also be available from other less expensive, or even no cost, sources. The new membership secretary, Megan Evans 07842 697788, would provide full details. The new club now had its own website with full details of membership and forthcoming rides for local riders: www.liskeardvelo.org.uk .

A huge thank you to everyone who made the time to respond to our survey about the future format of our Liskeard cycle groups. We were delighted to receive 29 responses with the following results. (Please note: for the first half of the survey relating to opinions I have given the responses in percentages; and for the second half, relating more to the commitments we are prepared to make, I have given the responses in numbers of people.)

92% agreed it is important for all our cyclists to have third party insurance. 75% agreed there is a case for exploring cheaper cycle club membership to facilitate this. Of those who didn’t agree, all but one were happy with their current Cycling UK/CTC Cornwall membership. 78% broadly liked the idea of establishing a Liskeard Cycling Club.

There were a number of helpful comments which I am summarising as follows: Some people made the point that they personally would not be making a saving by supporting these changes but were prepared to do so if it helped others. One person wondered whether we should not make the changes but instead use our CTC annual grant of £200 to subsidise fees for people who find it difficult to meet the costs of joining Cycling UK. (The Committee had looked at this possibility in some detail but in the end concluded that it was not appropriate for the committee to be conducting means testing of members and so abandoned the idea). There was also the positive thought that a local cycling club might provide the opportunity to include other cyclists (e.g. mountain bikers) and other age groups.

The committee met on the 30th April to consider the above responses. It concluded there does seem to be enough support to go ahead and create an Liskeard Cycling Club affiliated to Cycling UK. It did also acknowledge this was quite a lot of work so before proceeding with the change the committee has asked our Chair to double check with Cycling UK and with their insurance brokers whether our current ride leaders will still be protected if their cyclists have their third party insurance from a variety of sources (e.g. Cycling UK membership; British Cycling membership; British Triathlon Fderation membership; membership of another affiliated group, such as Callington Cycles Riders ; or through their own household insurance policy. ) We suspect the answer is no but we just want to check before we go ahead and make a lot of unnecessary changes. The committee is meeting again as soon as we get a response to try and make a final decision. Phew! Almost as bad as Brexit but thank you all so much for all your help. 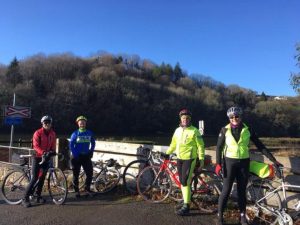 A new network of cycle trails in south east Cornwall could add up to £3 million per year to the local tourist economy, according to a report published in January 2018 by the Looe Valley Trails project, led by Looe Development Trust.

The trust has been seeking support for the creation of 70km of new trails linking Plymouth, Liskeard, Looe and Lanhydrock at an estimated construction cost of £8.3 million.

An economic impact study based on data from Visit Cornwall and evidence from other similar projects around the country suggests that the trails could be visited by as many as 500,000 people per year.

Research has also found that the scheme could generate £10 million per year of spending in local accommodation, cafes and other tourist activities.

It is believed that the scheme would create a growth of 4% in the annual market for tourism, bringing £2-3 million of added income that would otherwise not have been spent in the area.

As well as extra spending from new visitors, there could be several new businesses created including cycle hire and cafes at key locations along the route.

The preferred route uses mainly existing off-road tracks with the rest using quiet lanes, along the Glynn Valley and West Looe Valley, with a new section up the east Looe connecting Looe and Liskeard following the route of the Looe Valley Branch Line.

The route favoured for the Looe to Plymouth portion uses quiet lanes along the coast including the spectacular Military Road, and approaches the Cremyll Ferry through Mount Edgecumbe Country Park.

Reaching agreements with private landowners along the route will be an important next step for the project along with detailed engineering design work to get greater certainty about the project costs.

Justin Spreckley, chairman of Looe Development Trust, said: “Almost half of local businesses are in the agriculture, retail or hotel and catering sectors.

“Anything we can do to boost their business, particularly out of season, would make a big difference to local prosperity.

“As a local development trust, we have been delighted to lead this study and will now be championing the trails for further funding to make sure we get to see the benefits.

“We hope to set up a new friends of the trail organisation so that local people can get involved in helping to support the project and make the most of the opportunities it offers.”

The feasibility study included extensive consultation with the tourist industry, who were strongly supportive of the project.

Malcolm Bell, chief executive of Visit Cornwall, said: “South east Cornwall currently attracts fewer staying or overnight visitors than most other parts of Cornwall, so the potential for growth through the right investments is clear.

“Cornwall is perceived as one of the top three destinations in the UK for cycle tourism and there’s a big market available if these trails can be delivered.”

Deborah Boden from the World Heritage Site said: “The Liskeard and Caradon Railway in the East Looe Valley was constructed as the essential transport link between the Caradon Hill World Heritage Site area and the port of Looe, from where thousands of tons of copper ore were shipped to South Wales for smelting.

“The presence of the railway, and the canal to which it was linked at Moorswater, also facilitated the growth of a major trade in Bodmin Moor granite, which was exported across the world.

“The Looe Valley Trail provides a great opportunity to tell the story of how these places and their people were shaped by industrialisation, and will engage local communities in celebrating their history and identity as industrial pioneers.”

Sustrans, the national charity making it easier for people to walk and cycle, were involved in the study as part of the engineering and design investigations funded by Cornwall Counc

Simon Pratt, head of network development at Sustrans, said: “These trails fill a missing link in the national cycle network, connecting with Plymouth and Dartmoor to the east and Bodmin and the Camel Trail to the west.

“The Looe to Plymouth section in particular has been on our radar for many years and I hope that the time has come when it can now be delivered.

“As well as the tourism benefits, these trail routes are well connected to the railway network at Bodmin Parkway and Liskeard and offer more sustainable travel options for commuters and local people.”

Sandra Rothwell, chief executive of the Cornwall and Isles of Scilly LEP, which co-funded the feasibility study, said: “This study shows the potential for the Looe Valley Trail to make a significant contribution to rural businesses in south east Cornwall and could complement recent LEP investment in Bodmin to strengthen the local cycle network and the visitor econom

“We look forward to seeing further plans as they are brought forward.”

Edwina Hannaford, Cornwall Council cabinet member for neighbourhoods and a member of the trail steering group said: “These proposed cycle networks are a fantastic opportunity for south-east Cornwall and support our work to build strong local communities, each with their own identity and offer for visitors.

For full details of March and April rides, including locations and times, please click on link below:  (Please always check our facebook pages – Liskeard Velo, Liskeard Ladies, Liskeard Easyriders and Penzance Cycle Group –  for latest details of any changes or cancellations):