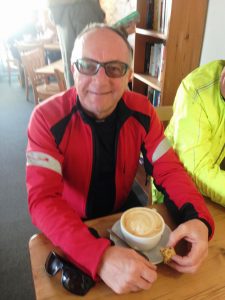 He says he simply cannot remember why he started cycling – it seems to be something he has always done.

Nowadays he enjoys fast (by his standard) road cycling which, he says, is slow by the standards of others. He also loves cycle camping with his dog in his trailer. 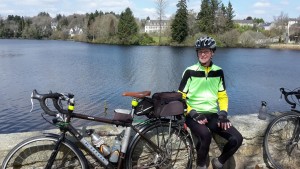 Having cycled since he was young, David has always found great enjoyment from the activity which, besides keeping him fit, has enabled him to visit many places far and wide. He feels it is far more satisfying to arrive by bike than car, within reason of course!

He has been involved with running the club since its start in 2008. Besides cycling with the club, David enjoys endurance riding with audaxing which gives the challenge of distance within a timing structure.

David has a Cannondale road bike, which he uses in the summer months when he tends to do larger distances, and a Kona disc tourer when the road surfaces or weather is less reliable. 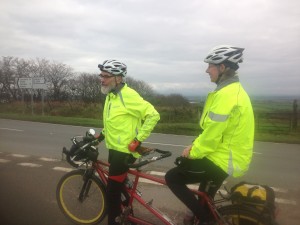 I normally ride tandem or when solo, a Moulton. At the moment our most heavily used bike is a Cannondale road tandem but we also ride 26″ wheel tandem in winter and for touring. Several 1960s F frame Moultons with 16″ wheels get a bit of use and are superbly comfortable but for long distance it has to be a modern space frame Moulton with 20″ (406mm) wheels.

I restarted cycling in 2001 aged 50 because I got interested in folding bikes as a transport option and was provoked into being more physically active by the arrival of a Saga pen and brochure. We soon got a year 2000 Dawes tandem as we had enjoyed a brief spell with a late 1950s tandem 30 years before. A couple of tandem hires convinced us that a modern alloy framed tandem with lots of low gears and plenty of length at the back would let us get around the Cornish lanes happily.

We normally ride 50 to 70 miles with our local club on Sundays and do some utility cycling in the week. For the last few years I’ve been extending my distances to include some long Audax events on the small wheels. 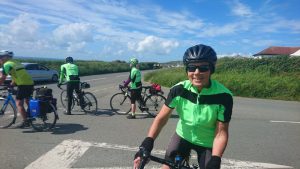 Ann started cycling more seriously in 2014 at the age of 62 when a knee injury prevented her running.  Her son helped her purchase a road bike (a Moser Speed, entry level with aluminium frame and carbon forks) and, after a nervous start, she began to gain confidence through the Wednesday evening rides with CTC Cornwall.  Eventually she was able to graduate to the 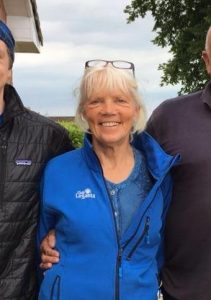 longer Sunday rides.  Then through 2015 she enjoyed taking part in a number of Sportives and even completed a wonderful End to End adventure with her son.  As Publicity Officer for CTC Cornwall, Ann attempts to keep the website updated, writes a regular blog about the club rides and looks out for other promotion opportunities. 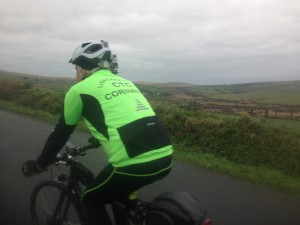 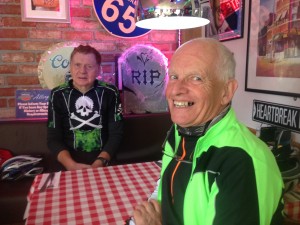 Dave’s favourite bicycles are Xeon CDX for long distance and audax rides; his Raleigh Royal for touring or long distance where speed is less important; his Cube Hooper pro for general riding; his Kona explosive for off-road; his Peer Gynt recumbent for summer leisure rides; and his Brompton for holiday rides.

He has cycled all his life and says that it is in his blood, his father being a Devon/Cornwall grass track champion.

Dave now mostly enjoys road cycling and is a regular supporter of the CTC Cornwall group rides.  He does, however, have a very good feel for how intimidating a long ride can sound on paper and is keen to support less confident riders.

Mike has been a keen supporter of CTC Cornwall for a number of years.  As representative of riders in the St. Austell area he points out that the club promotes safe cycling at an easy pace and that this is not racing . There are also periodic  longer rides and social events.  He says that CTC is all about companionship and simply enjoying the day. 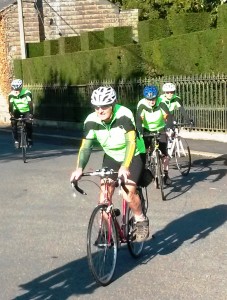 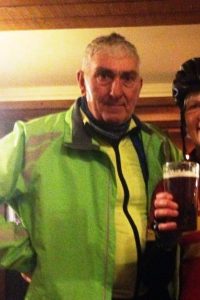 To get a message to any CTC Cornwall Committee member, please just use the Contact Us tab above and mark your message for the attention of the member concerned.